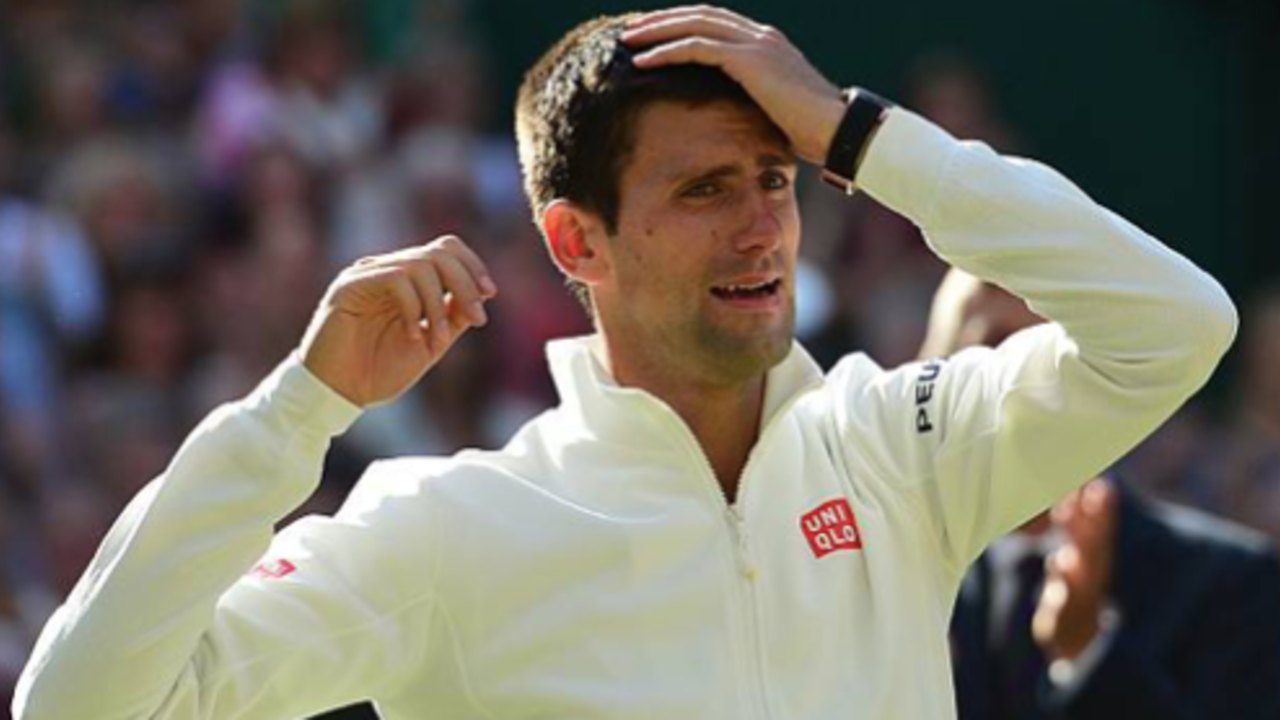 When Novak Djokovic prepared to serve at 3-3 30-40 in the 5thset against Roger Federer in the Wimbledon Final, imagine the internal challenges he would have encountered.

Being faced with the prospect of losing from 5-2 up in the 4thset must have been a chaotic mental test.

But fighting off break point in that moment and going on to deny Federer’s awesome comeback was an incredible effort.

To explore how much Djokovic has improved in the last few years I decided to compare his results from 2008-2010, with those from 2011-Present…

While this 11% improved winning % is significant, looking specifically at his statistics against Federer, Nadal, and Murray reveals an even more important story…

Overall, he has gone from a combined winning percentage of 34% to 65% against the greats.

Why Is This So Important?

Well, it shows us that his improved results can largely be attributed to the matches that matter most.

From 2008-2010 he was already so dominant against the majority of players on tour that his limitations did not cost him matches.

But under the spotlight of playing Federer, Nadal, and Murray; and the pressure of the big moments when matches are won and lost on a few crucial points, he often folded previously winning only 1 in 3 times; whereas in the last 3 years he has come out on top an extraordinary 2 in 3 times.

What Has He Improved?

Let’s start with the most well known. Djokovic’s change to a gluten free diet has become so famous that he has written a book about it.

As I am far from qualified to speak about how his new diet has helped him, I will leave you to explore this factor elsewhere.

Though it seems a distant memory now, you may remember the turmoil that Djokovic endured in 2010 when he changed serve technique and developed the dreaded yips.

Restoring the technique on his serve, and redeveloping his trust in its reliability under pressure, has been hugely important both from a physical and psychological level.

This is a strong reminder of the importance of developing fundamentally sound technique as a foundation for mental toughness.

And these adaptations can be commonly seen from juniors, to recreational players, to the best of professionals.

In Djokovic’s case, my guess is that his frequent early career mental stumbles were in part the consequence of an inability to tolerate the stress of pressure moments, resulting in some of the adaptations mentioned above.

But what has been so impressive in the last few years is that he has improved his ability to handle the stress of competing against the world’s best in the most challenging moments, and throughout the most demanding adversities.

How Has He Done It?

It is mind boggling to me that despite Djokovic’s occasional mentions of ‘mindfulness’ practice over the last few years, it hasn’t received more publicity.

It is surprisingly still a secret to many.

In explaining his dedication to/and understanding of mindfulness in his book, ‘Serve to Win’, he said this,

“I do it everyday for about 15 minutes and it is as important to me as my physical training…Instead of trying to silence your mind or find ‘inner peace’, you allow and accept your thoughts as they come…they do bounce around like crazy, but they’re supposed to, your job is to let them come and go”.

And on the benefits,

“I’ve done so much mindfulness that my brain functions better now automatically…I used to freeze up whenever I made a mistake. Now when I blow a serve or shank a backhand I still get those flashes of self doubt but I know how to handle them”.

So when that 3-3 30-40 moment arrived against Federer, with difficult thoughts racing and difficult emotions flooding his body, rather than having to make efforts to control or reduce these internal difficulties, his mindfulness training at least in part likely contributed to an increased fitness in being able to cope.

And this better placed him to put his energy into choosing and committing to an appropriate strategy for the point.

As he said in his post match interview, “I could have easily lost my concentration in the 5thset and just handed him the win, but I didn’t, and that’s why this win has a special importance to me mentally. Because I managed to not just win against my opponent but win against myself as well and find that inner strength that got me the trophy today”.

If you would like access to the Mindfulness Activity that we usually use with players as an introduction to the practice You Can Get It Here...

Wherever you're reading this, scroll down. Leave a question or comment for us, and all the best for the coming week :-)...