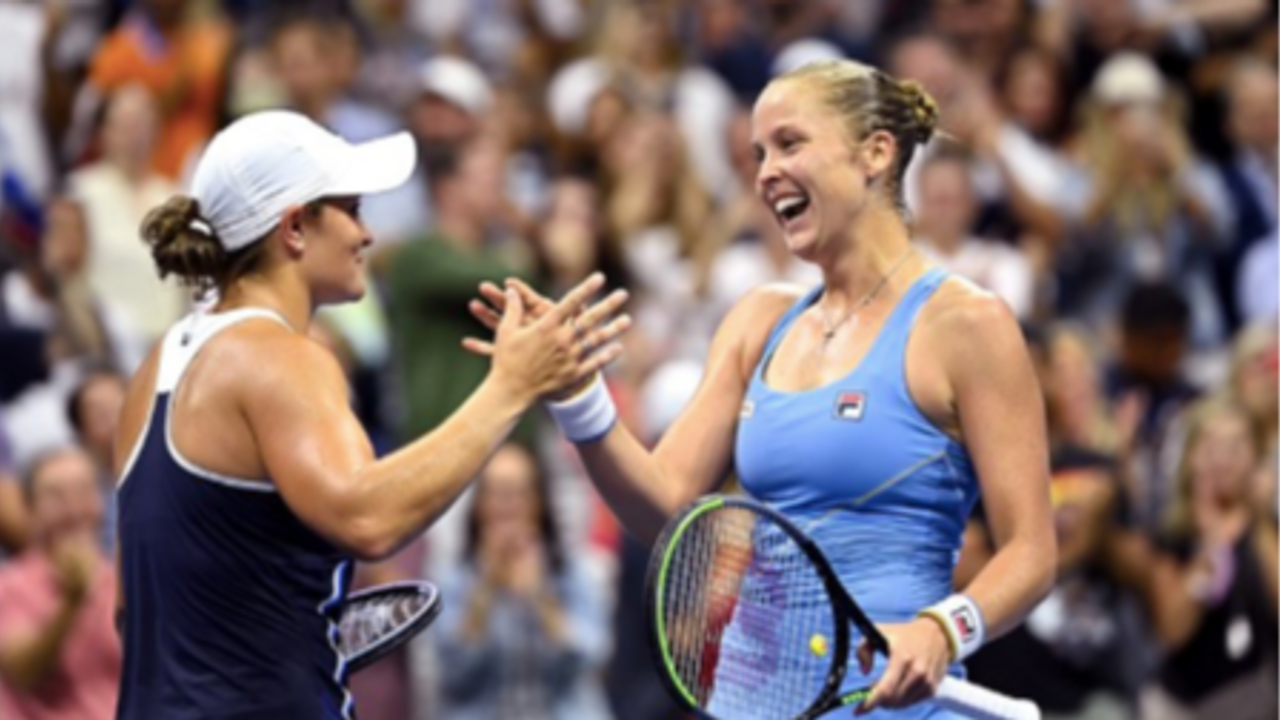 As a massive Ash Barty fan watching her lose from 5-2 serving in the 3rd set was hard to watch. And it got me reflecting on Ash's Grand Slam record during the last couple of years which is both amazing and curious.

On one hand she and Osaka have been the best Slam performers in women's tennis which is simply incredible considering that at one point Ash had walked away from the game with no particular intention to return. But on the other, Ash seems to have left several potential Slam victories on the table due to losing matches that she was in full control of.

The 2020 Aussie open semi-final loss to Kenin in which she had a couple of set points in the first set comes to mind. This year's Aussie open quarter final where she was dominating Muchova a set and a break. And yesterday's loss to when leading 5-2 serving in the third against Rogers.

And even in the 2 Grand Slams she's won, Ash had to make amazing recoveries from getting tight and losing leads during crucial matches. In her semi final of the 2019 French Open victory she led Anisimova 5-1, 40-15 before losing the first set and going down 3-0 in the second (amazing effort). And in her Wimbledon final victory she did incredibly well to recover from getting tight and failing to serve out the match in straight sets before recovering to win in 3.

With this in mind, here's some of my thoughts on why even the greatest players in the world are susceptible to choking, and how all players including Ash can likely compete more effectively when leading...

And the more of our lives we put into tennis the more it hurts to lose. So you would think that getting beaten easily would make us feel the most pressure. But funnily enough, it doesn’t.

Why is this so?

It probably has something to do with the personal responsibility to failure that comes when we lose from in front.

When we're getting beaten easily we automatically blame our sport skill. We perceive the failure as a result of skill deficits.

But when we're in a winning position and falter it can’t be our sport skill because we were good enough to win but we didn’t. There is something much more personal about this situation that results in our evolutionary brains perceiving the loss as some sort of failure of our sense of self which is more painful.

This makes losing from in front more psychologically dangerous, which increases fear of failure.

So with choking, we desperately want to win, and continue trying to win despite the fear which makes it one of the most admirable experiences in tennis, but become caught up in fear of failure.

With the choke our body and mind reacts to the fear of losing in predictable, unhelpful ways. Our muscles tighten and our heart beats faster, our thoughts speed up and become jumbled, and our attention tends to focus on what we don’t want to happen.

As we notice these symptoms we might become nervous about being nervous accidently increasing the natural fear response (“Oh no, here comes the nerves.”) And all of these reactions tend to remind us of times we've choked before.

While Ash's fantastic mindset coach Ben Crowe and most other performance experts believe that we control our own mindsets, I don't agree.

I believe that while we can increase skill in how we respond to our mindsets with our actions, and while we can shape our mindsets over time, I don't think we control the uninvited, unintentional thoughts that are continually showing up in our mind during competition.

The reason for this is our brains evolved as essentially memory machines. Designed to continually, automatically prepare us for the future based on what's happened in the past, invisibly creating our present thoughts and feelings. In this way our brains act like an 'anticipation machine', funnelling and filtering incoming information through the lens of our past experiences, and influencing how we come to perceive future situations.

In Ash's case, with a recent history of losing leads and struggling to serve out close matches of Grand Slams, it's unavoidable that she will experience difficult thoughts and feelings in similar situations in the future, at least in the short term.

And unfortunately, it's possible that her struggle to control these thoughts and feelings during yesterday's match with Rogers, actually cost her the match.

So How Can We Reduce Choking?

As with most detrimental performance responses, the first thing I recommend is players recognise the normality of fear of failure when leading, and the challenges it presents. Regardless of how well balanced players perspectives are, choking is something that all players experience at some point, and a great starting point for responding better to fear, is to normalise it.

2.) Recognising the Bravery of Choking

The positive with choking is that it shows that we are willing to face and tolerate the fear, which is one of the most admirable things in tennis and something that many players can't do. From this position we're able to see clearly what's going on, and work on responding better to it.

Although not ideal, chokers also have a better chance to win because they're still trying. Remember, someone who chokes is choosing to stay with the difficult feeling when many others find ways to escape the fear and pain of losing, and that by being able to face fear takes incredible strength of character.

In Ash's case her ability to respond well to getting tight and losing leads in the 2019 French Open and this year's Wimbledon final gave her the chance to win 2 Grand Slams - incredible!

It's also important for players to have helpful practical strategies for competing more effectively when fear of failure in winning positions inevitably shows up...

As I said, I don't believe it's helpful to advise players that they should be able to control the fear during this situation.

In fact, this approach can lead to players engaging in an unwindable mental struggle and self-judgment (e.g., "why can't I control my mindset")

Instead, it's best to help skill players to respond as best as possible to the naturally occurring unhelpful mindset.

The first is was I call Notice-Look...

When we're choking we're automatically caught up with the elements of fear. The choke often is like a blur and we might have little awareness of what's happening.

So we first need to recognize our mental experiences. We can do this by stopping for a moment when not competing effectively and checking for difficult internal experiences. When we notice the nerves, or our mind reminding us of recent times we've choked, we should simply look at where we notice the physical sensations of fear in our body and observe it for 5 seconds or so like an interested bystander might watch a passing parade, without trying to change of reduce the sensations in any way.

Observing and describing difficult internal experiences in this way has several benefits. It will first likely give us a perspective of distance from the fear response so we won’t feel so caught up in it. Many people also report that when they simply place and maintain attention on the fear experience itself without trying to reduce it, it begins to dissolve on its own. And brain studies have revealed that when we put difficult internal experiences to words by describing them it actually tends to reduce them without our intention. So if we also describe the sensations while observing them (e.g., "there's nerves" or "there's fear") the intensity may reduce on it's own.

Another helpful thing to realise here is that fear makes our attention narrow in and focus on the thing the fearful stimuli.

When competing this has the effect of overwhelming out attention so that we lose connection with the fact that there is more here in the moment than just the experience of fear.

So, with the expanding awareness strategy, between points or at the change of ends, we also try to notice that there's much more than just the fear here in the moment.

We can do this by shifting our attention onto elements of nature if playing outdoors, or the sensations of each step as we walk (because we don't feel fear in our feet).

This recognition of other things besides the fear experience is not designed to escape the fear, but instead to help up gain contact with a more complete sense of the present moment which includes both the fear and other things that don't include fear.

These quick techniques can loosen the grip of the choke experience over our behaviour.

And after we complete the notice-look-describe or expanding awareness process we'll be better placed to shift attention back onto the action we need to complete to increase the chance of success.

So, the practical process I encourage to help reduce choking involves Notice-Look-Describe/Expanding Awareness between points/at change of ends, then Shift Attention onto a helpful intended action, then actually committing to the actions we want to take (while we have the difficult mindset, rather than trying to control the mindset itself).

While it's a relatively simple process to understand, it's not easy to complete as the choke is a powerful experience. But I've found that little by little players can learn to be less caught up in the fear when they practice this process.

And over time, because they can perform more adaptively when nervous, they actually become less concerned about experiencing nervousness, which leads to less choking as a result.

So while choking feels terrible, that terrible feeling is actually a sign that a player is willing to have the fear that naturally comes with competition. This means that we are actually quite close to being able to compete super effectively under pressure.

By normalizing and reframing the choke response as admirable, and engaging a practical process based on self-awareness and acceptance of our brain's shortfalls when experiencing fear, we can respond better with the challenge of leading and in particular trying to finish close matches.

I hope you find this helpful...

P.S., If you'd like help with overcoming any of your common competitive challenges, choose from our free Competitive Issues Booklet Series here...