3 Important Lessons We Can Learn From Thiem 'Getting Tight' 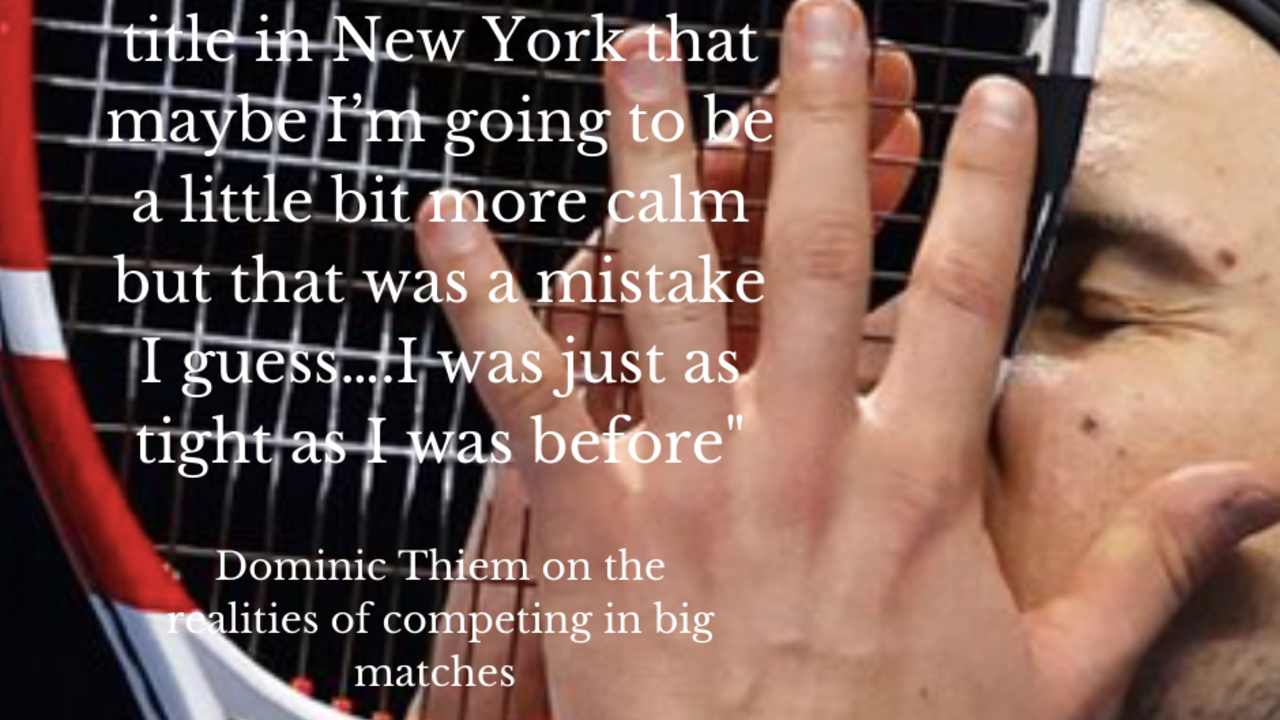 The last couple of months have been a little bit of a whirlwind for me having my first child…Kudos to all or you who are also parents- it didn't look as challenging as I'm finding it from the sidelines :-)

And one moment stood out from a mental perspective…

When Dominic Thiem was trying to finish Novak Djokovic in the 2nd set tiebreak despite being one of the most relentlessly aggressive  players on the tour, he didn’t commit to this gamestyle in that moment. Instead he played more conservatively and even defensively on a few points.

This cost him the set after having 5 match points….

He did amazingly well, however, in recommitting to aggression when down in the 3rd set breaker, to reel off an incredible run of points to get the win.

When asked whether his win was more of a mental battle than a physical battle he replied,

“It was for sure a mental battle, I got so tight in the 2nd set tiebreak, first of all because to play these legends, and playing for a final here is something special. I thought that after winning my first big title in New York that maybe I’m going to be a little bit more calm but that was a mistake I guess….I was just as tight as I was before.”

A couple of important points we should all take note of here:

1.) Despite being an incredible example of someone who has committed to developing his best long term game style since he was a boy, under the highest of pressures Thiem is still vulnerable to getting caught up in the urge to play more tentatively

2.) So often when I talk to coaches, parents and players they want my advice on how to reduce nerves or ‘getting tight’ as that is, they think, what is the ‘problem’. I of course have to let them know that if the best players in the world can’t control these emotions in a helpful way, then there is little I can do to help with this either. Instead, I inform them, what I can do is help them to develop skill in responding to the nerves when they naturally show up in pressure moments...and just doing a little better than the player down the other end!

3.) It is also important to recognize that some players actually do a great job of controlling difficult emotions like nerves/fear. But unfortunately this almost always comes at the cost of competing effectively. Common examples are the habits of anger, tanking, excuse making, losing concentration, perfectionism which all serve to avoid or reduce fear. Players feel better in these cases but play worse because their energy and effort is going towards controlling difficult emotion rather than committing to helpful actions.

Overall, players should focus on practicing increasing capacity to tolerate and respond well to difficult internal experiences like nerves and outcome thoughts, rather than trying to control their unintentional difficult thoughts and feelings in a helpful way.

P.S... My Coaching Mental Toughness Professional Development Class is now available on demand. This is the class for you if you coach a player or players who underperform relative to their physical and technical skill and you want to improve your skill in being able to help them. You can check out all the details by clicking below (the 1st week is completely free)...

And if you are a parent or player, check out the different ways you or your child can engage in mental fitness development via my free supports and paid courses by checking out my website...